This is An illustrated introduction to brain aneurysms, by guest author Dr Ciléin Kearns (artibiotics) 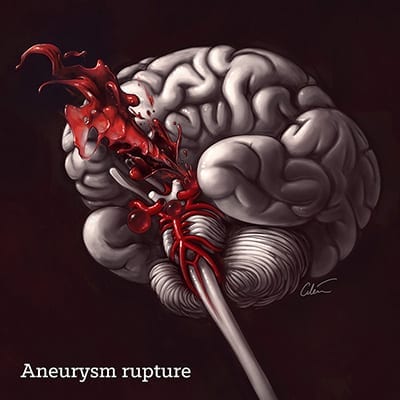 An aneurysm is a bulge in the wall of an artery. It creates a weak point in a pressurised system. The aneurysm can burst, leaking blood with catastrophic results, including disability and death. There is an important network of arteries in the brain called the circle of Willis (shown in red). These supply the brain with nutrient and oxygen filled blood, needed to keep us alive. This network is particularly vulnerable to developing aneurysms. 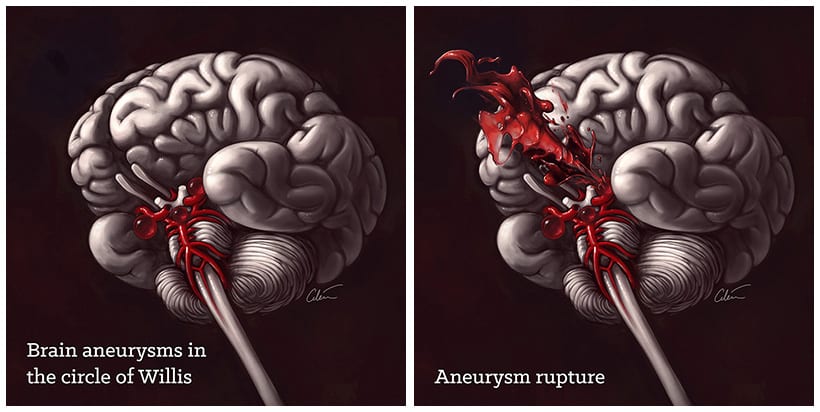 If a brain aneurysm bursts, the resulting bleeding is known as a subarachnoid haemorrhage, which just describes the anatomical layer the bleed happens within. The blood supply to the area of brain this artery supplies is then compromised, causing a stroke, which impairs the functions which that brain tissue is responsible for, e.g. speech, or sight.

Brain aneurysm rupture (bursting), and the resulting subarachnoid haemorrhage (bleeding around the brain), is therefore extremely serious. Permanent disability, or death can happen quickly if it is not managed promptly.

that doesn’t sound brilliant. is there anything that can be done about a brain aneurysm?

I’m glad you asked. Yes, there is. Thanks to the discipline of neurosurgery. The management options will depend on two major factors:

1.     whether the aneurysm has already ruptured

2.     how medically fit a patient is for major surgery

The skull is opened up, aneurysm found, and then ‘clipped’ with a metal clip. This cuts off the blood flow within the aneurysm, sealing it off from the arterial circulation.  The aneurysm then withers over time. It can be technically challenging for neurosurgeons to reach a brain aneurysm, operate their tools in a confined space with limited visibility, and successfully clip it without cutting off blood flow to the brain.

Our second option is more suited to patients who cannot undergo a major surgery. With ‘coiling’, the surgeon will insert a small catheter (tube) into an artery in the groin, and snake it through the arterial system into the aneurysm using imaging guidance. Once at it’s destination, a thin metal wire is pushed into the aneurysm, where is ‘coils’ into a messy ball. This is left there, and the catheter removed. The metal coil will agitate the blood and trigger a clot to form around itself, which effectively seals the aneurysm off from the arterial circulation.

okay great but who actually gets them?

Approximately 1 in 100 people has a brain aneurysm. They are most common in African-Americans, then Hispanics, and lastly White individuals. Women get them more commonly than men, by a factor of 3:2. Smoking and high blood pressure are modifiable risk factors. Rupture is most common in those over 40 years of age. Don’t worry too quickly however; although rupture can be fatal, this only occurs in 1 in 12,500 aneurysms. The risk increases greatly if a previous aneurysm has ruptured.

what happens when a brain aneurysm ruptures?

The symptoms of an aneurysm bursting are largely the result of a sub arachnoid haemorrhage, which is a bleed (haemorrhage), under (sub), the arachnoid layer of the brains coverings.

A person will experience a sudden, severe headache, sometimes called a ‘thunderclap headache’. This has been described as ‘feeling like you were hit across the head with a baseball bat’. It is not a vague, mild headache, that came on gradually. 15% of people who get a subarachnoid haemorrhage are dead before reaching hospital. 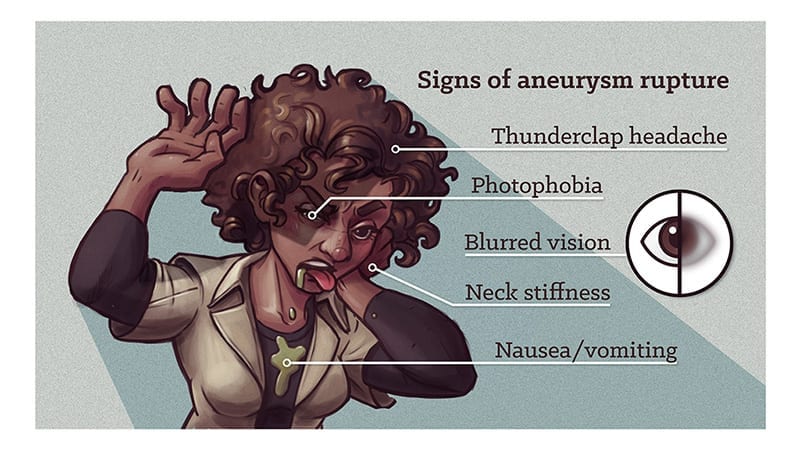 Other symptoms of rupture are those of ‘meningism’ which is irritation of the meninges, (the protective layers of tissue which cover the brain), or raised intracranial (within the skull) pressure:

– Blurred vision: vision that is blurry, as in not clear, as in.. I think you get it

– Neck stiffness:  moving the head is painful. Looking down, or touching the chin to the chest is particularly limited by pain

– Reduction in, then loss of consciousness 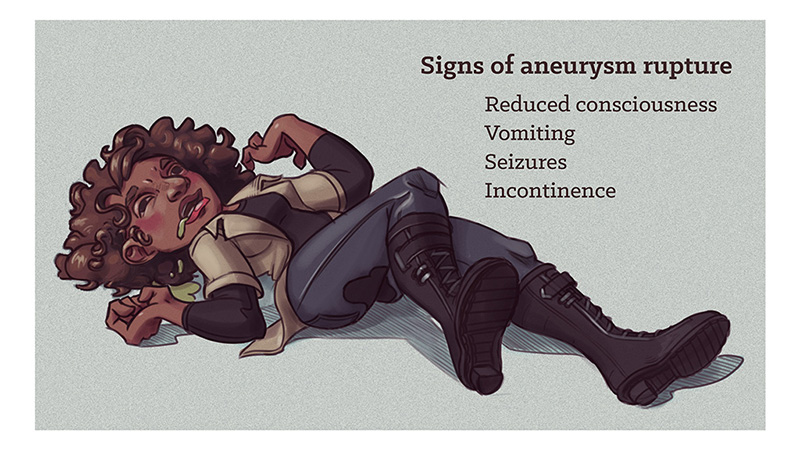 Brain aneurysms can be scary, life threatening problems. There are limited things a person can do to prevent their occurrence or rupture, and they need to be dealt with immediately if they burst. Fortunately, there are some clever things neurosurgeons and interventional neuroradiologists can do to stop, and prevent aneurysm rupture if they can detect these before, or get to a patient in time after this occurs.

This is a guest article written and illustrated by Dr Ciléin Kearns (artibiotics); a Medical Illustrator and friend of Brainbook, who creates medical art to explain and entertain. Check out his illustrated blog and Instagram.

The medical content of this article has been reviewed by Mr Chris Uff, Consultant Neurosurgeon at The Royal London Hospital, Barts Health NHS Trust, and co-founder of Brainbook.

Get our articles and videos delivered straight to your email.

Find Us On Social Media

Brainbook is a charitably incorporated organisation.
(Charity commission No 1181711)